Valentino Rossi won MotoGP’s Catalan Grand Prix,taking his second win of the season and dedicating the victory to Luis Salom, the Moto2 rider who died on Friday free practice crash.

Rossi was coming off a disappointing race in Mugello, when he had to retire with engine failure while on second place and with a good pace for winning the race.

Starting from fifth on the grid Valentino Rossi had his work cut out for him as he dropped back to eighth when exiting the first corner but quickly made his way to the front and was leading by the seventh lap at the Barcelona-Catalunya circuit. Marquez tried to pass him a few times near the end but couldn’t get it done. Rossi held off the charge by Marc Marquez to secure his second win of the season. The Italian finished 2.6 seconds in front of 2nd placed Marquez and 6.3 seconds ahead of 3rd placed Dani Pedrosa. Maverick Vinales finished 4th for Suzuki infront of Pol Espargaro Monster Yamaha on 5th.

Rossi’s first place earns him 25 points. This result keeps him in third place in the championship standings on 103 points, now just 12 points behind Lorenzo in second position and 22 from Marquez. The 2nd place allowed Marquez to take the championship lead from Jorge Lorenzo, who was taken out of the race after an aggressive overtaking attempt by Andrea Iannone with nine laps to go. Lorenzo took the lead at the start but start to struggle and fell back through the field. He was fifth when Iannone crashed into him.

Rossi and Marquez had been at odds since an incident on the track last year but made amends after the race in Barcelona.

“It was important that we shook hands. Motorcycling deserved it,” Marquez said. “We had a great battle in a weekend in which we were reminded that we are all humans. We have to respect each other. We don’t know what’s going to happen to us.”

“It was one of the best victories of my career, and I dedicate it to Luis Salom and to all of his family,” Rossi said.

All three riders arrived at the podium wearing T-shirts honoring Salom, the 24-year-old Spaniard who died after colliding with a protective barrier at the Barcelona track.

Meanwhile, Johann Zarco won the Moto2 race, which was also marked by a series of events to honor the death of Luis Salom. “All riders were thinking about him,” Zarco said.

“Always in our hearts,” said the slogan appeared on the shirts worn by all the MotoGP riders on the podium.

We salute you again Luis, rest in peace. 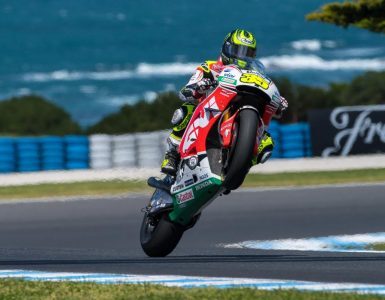 After Friday afternoon practice was cancelled due to the rough weather, the rain was hammering down on the Australian circuit, it seemed we were in for another rainy MotoGP race. 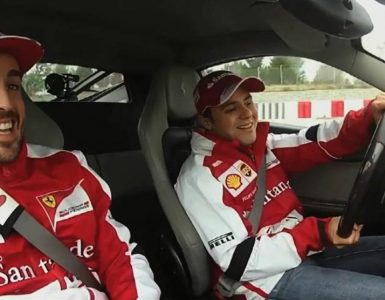 A great video of a hot lap with Alonso and Massa driving the Ferrari 458 Italia at the Circuit de Catalunya. 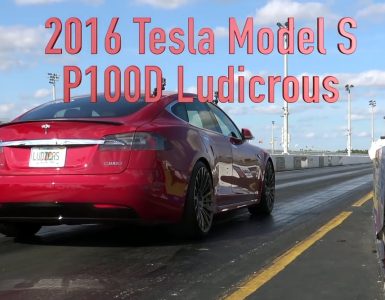