Everything you need to know about the Ford Mustang GT350R

526 Horsepower, flat-plane V8, a manual 6-speed gearbox, MagneRide suspension and gigantic 394 mm two piece disk brakes to stop it in its tracks. What else could you possibly wish for?

No, we are not talking about another Lamborghini or Bugatti. This is the setup of Ford’s wildest Mustang yet. Build in cooperation with Shelby, they followed Carroll Shelby’s original idea – Get the Mustang from a daily driver to a dominant road racer – to the letter.

So they stiffened the chassis over the previous model by 28 percent, making it the strongest platform in Mustang history. But that still wasn’t enough for the GT3560 models, so they added extra reinforcements to handle the massive power and make the tires stick to the road as intended.

Being the most track capable mustang ever they couldn’t just leave it with a heavy set of wheels that would add unnecessary unsprang weight to the car (remember the huge brakes already fitted?). So they created the first mass produced carbon fiber wheels.

Among us petrolheads, carbon fiber wheels are on the short list of dream components for high-performance vehicles. Yet it’s a component found only the rarest of the rare. For instance, the Koenigsegg Agera R.

By going all carbon fiber on the wheels, Ford has cut down on the weight by more than 40 percent, giving it a serious performance boost.

Its 5.2 liter, Flat-plane crankshaft V8, lovingly called Voodoo, revs to a mindboggling 8.250 rpm redline, producing 526 horsepower. The connecting rods attach to the crank at 180 degree intervals in comparison to a normal V8’s 90 degrees. We also noted that the crank and rods as well as the pistons are forged by default in this amazing naturally aspirated engine.

The sound is unlike any other American muscle car, it sounds more familiar with Ferraris and the likes. It also has to do with the short tube 4-2-1 exhaust headers, used to get the smallest backpressure possible. Just listen to the roar below! 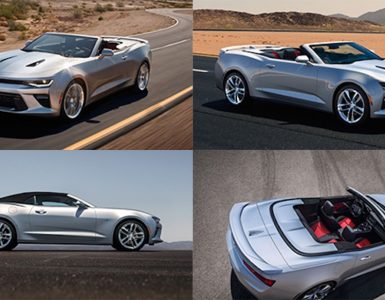 Chevrolet has unveiled its Camaro Coupe in May this year and now the time has come to lift the curtains on the first major spinoff – Camaro convertible. The low-res photos were posted to the Chevrolet website and...